RoS The Seven Swords of Wayland 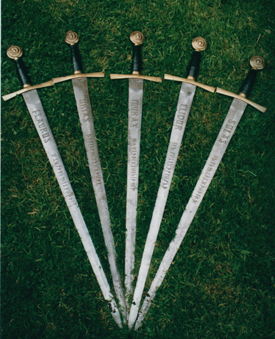 "Morax, Solas, Orias, Albion, Elidor, Beleth, Flauros. On each of them, words of high magic unspoken since they were made. Wayland knew the danger. Oh yes, he knew. That's why he scattered them and for hundreds of years they remained apart. Two of them were buried. Others lost in battle and some so cunningly hidden that none had knowledge of them. The search took many years, many lives."
Robin of Sherwood and the Hounds of Lucifer

Albion is the only sword of Wayland that features in more RoS episodes than just The Swords of Wayland, as it is Robin Hood's sword. It is entrusted to Robin of Loxley by Herne the Hunter in the first episode, with the words: "It is Albion. One of the Seven Swords of Wayland the Smith. Charged by him with the powers of light and darkness." Before Robin dies, he gives Albion to Marion, who guards it until she can pass it on to the next Robin Hood, Robert of Huntingdon.

There were multiple versions of Albion (fighting swords, close-up swords, replacements throughout the series because swords broke or got lost etc.), but the seven Swords of Wayland were one of a kind as they were for just a one-off episode. They were specially commisioned pieces (presumably by Alan Meekins and Tony Rotherham as well), acid etched, and cost £800 each even back in 1984, according to Phil Rose.

Thanks to James Deval's diligent research (see The Nothing's Forgotten Discussion Forum) it has been determined that in The Swords of Wayland episodes the swords have been wielded by:

Phil Rose (Brother Tuck) was the keeper of the RoS Swords of Wayland for many years, except for Beleth which had already disappeared during the filming. Phil donated five Swords of Wayland to the charity auction at Silver Arrow '98 convention. 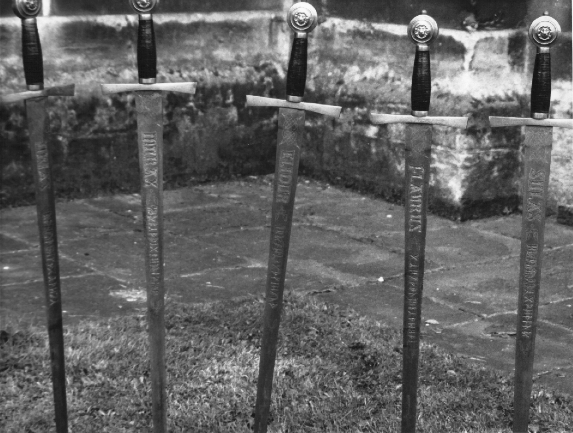 The Swords of Wayland feature a pommel with a lion's head on both side. The runes run on just one side of the blade.

Josef Daws of White Well Arms is making Albion replicas for GBP 350 and they take international orders.
The swords are loosely based off the original Albion sword which was displayed in "The Tales of Robin Hood" in Nottingham, UK. The brass pommel is said to be cast from the original. 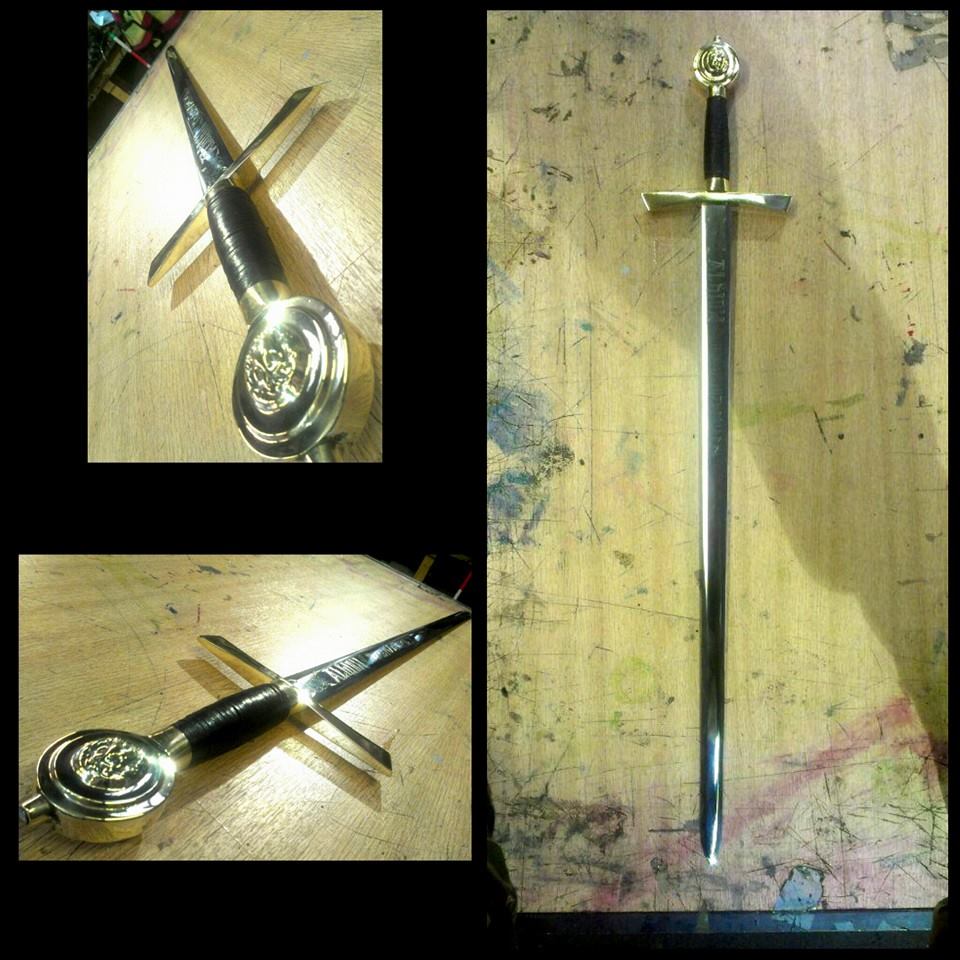 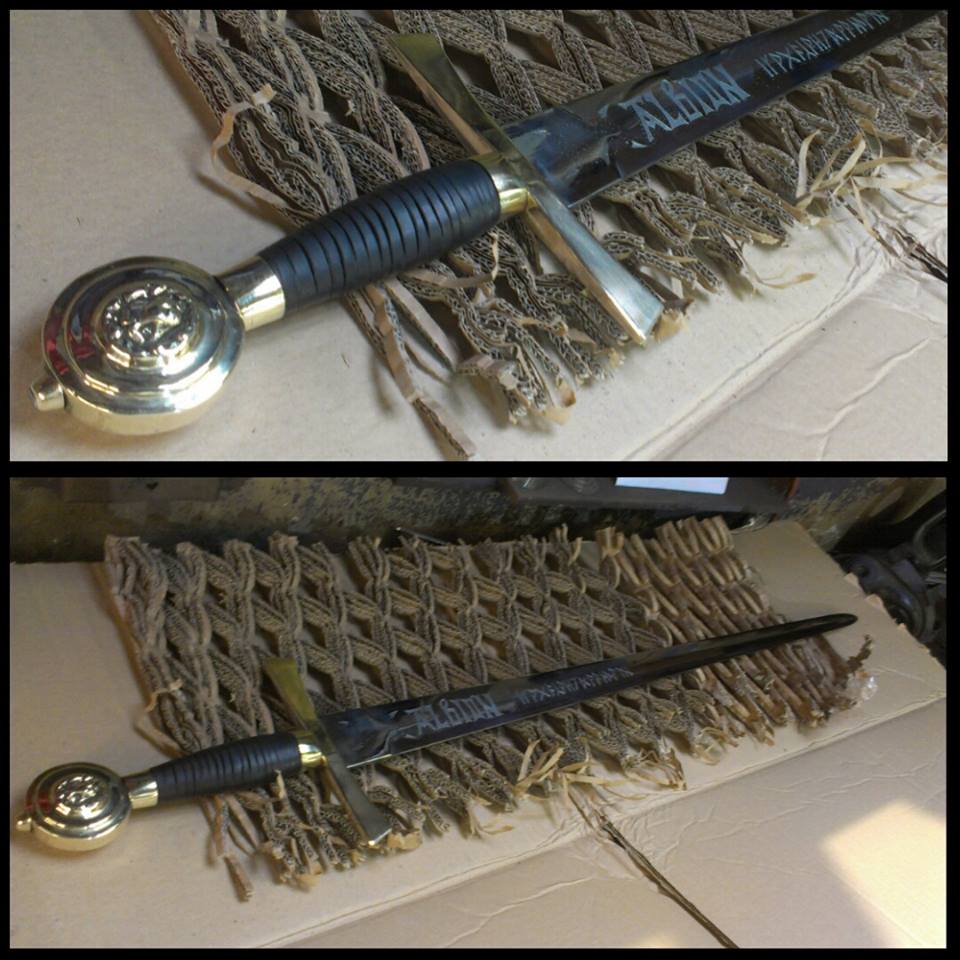 Lars Hansen of Albion Swords / Film Swords designed a high-quality, sharpened Albion from the many versions of this sword. This Special Limited Edition Albion Sword costs U$ 1,320.

In 2000 armourer Tim Noyes of Heron Armoury (UK) did a custom-made battle-ready Albion replica on request from a couple of close-up pictures and the Solas dimensions given above.

What's in a name?

Among other magical items that Wayland supposedly created, the Lemegeton or Lesser Key of Solomon (Clavicula Salomonis, a grimoire attributed to King Solomon but probably originating in medieval Italy) mentions the Seven Swords of Wayland, each of which is imbued wih one of the seven powers of light and darkness. Each of these powers is in turn connected to a certain demon or entity. These entities and their corresponding power are:


The seventh sword was not named, but unofficially has been called Abigor (Albion in RoS) with the power of Scrying (divination). Abigor was conjured for his power to foretell the future and to provide military aid and advice.

Jae Flemming has dedicated a whole webpage to this subject: The Mystery of the Swords of Wayland ... Revealed .

In The Swords of Wayland Morgwyn of Ravenscar links a name of Lucifer with each of the swords, picking up one of the swords when she speaks a name. Unfortunately, in the TV episode you cannot see which name is associated with which sword, but if you take the novelisation and align the order in which she first names the swords and later she names Lucifer, then you get:

Elidor - Asmodeus, Creator of Judgement
Beleth - Satan the Adversary
Flaures - Behemoth the Beast
Morax - Diabolus the Devil, killing both body and soul
Solas - Demon, which signifies Cunning over Blood
Orias - Belial who is masterless
Albion - Beelzebub, Lord of the Flies

For those who want to know more about runes, here's a webpage with rune links from around the world.

In the The Power of Albion it is suggested that the runes on Albion mean: "Herne's son is my master. I cannot slay him."

The above drawing was made by Gary Rhodes from the 'fighting' Albion in "The Tales of Robin Hood". It is unknown if it has different runes to the 'show' Albion or not, or whether they are different from the Series 3 Albion. 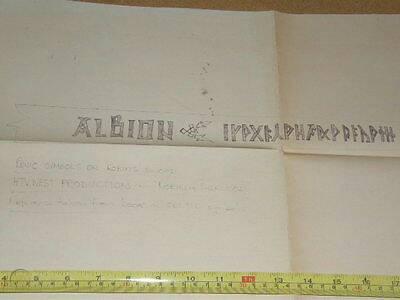 The above is listed on WorthPoint as a facsimile of a drawing originally made by RoS set designer John Biggs. Text reads: "Runic symbols on Robin's sword. HTV West Production. Reference taken from book on celtic symbols."

Hagalaz, the rune of transformation, banishment and intervention, begins the talisman.
This is followed by the imcomplete form of Dagaz, the rune of complete awakening. Dagaz is the epitome of life + death, body + soul.
The third rune is Wunjo: joy, delight, the harmonious existence of affiliated sources. It binds the different fields of force together, aiming at a specific result. The dot which follows it serves to emphasise the talismanic phrase and gives it force at the point.
The next phrase (also ending with Wunjo) commences with Laguz. This rune emphasises both phallic strength and the entry into the spiritual realm through the watery passage of death.
There follows a bind rune based on Isa, the rune of ice. This bind rune shows the sword's ability to stop or freeze his foe in his trackes.
This is followed by the esoteric form of Kenaz, the source of knowledge and also the rune of controlled fire. This represents the sword wielder's controlled emotion and wish for regeneration through possible death. Think of the controlled power of the psyche which has led to the creation of the sword!
Ansuz follows, the rune of incantation and of the protection of the Goddess.
Here again stands Kenaz, neatly balanced now either side of Ansuz, offering the sword wielder great strength. Ritually, Kenaz is the fire of creation, and of the forge - a reminder of the sword's origin at the hands of Weland!
Gebo is next, representing the gift of the gods to mankind. Gebo also represents magical and esoteric power which is retained by the sword wielder as knowledge of the underworld.
The last section of the talisman (following Wunjo) provides us with Hagalaz once more, Wunjo and then 'K'. This latter rune is not readily identifiable but could be construed as a modified version of the Armanen form of Feun, the rune of fire and of the Goddess Freya. However, I am unhappy with this since the Armanen system was not developed by List until the 1900's!
The row ends with Laguz and then the incomplete Dagaz, the rune of total awakening where body and soul, matter and energy are synthesised.
The whole talisman is weighted towards the idea of the magical focus of the sword and its wielder. Looked at as a whole, we can see a progression through the gift bestowed upon the wielder by the gods and goddesses to enable the wielder to achieve as stasis and point of enlightenment. The double use of Kenaz serves to emphasise this point.
This is very much a sword that is indebted both to Weland and to the forces of the underworld.

As Beleth has vanished long ago, unfortunately no pictures or runes of this sword are available.

Wayland, also know as Weland, Weiland or Volund, features in Anglo-Saxon, German and Scandinavian myths. He is sometimes known as the god of Smiths, the German equivalent of Vulcan or Hephaestus, and at other times he is portrayed as a Lord of the Elves. The myths he features in tell how Wayland and his two brothers met three swan maidens (or possibly Valkyries) by the shore of a lake and fell in love with them. They stayed together for seven years until the swan maidens flew off, and the three brothers went their separate ways to seek their lost loves. Wayland was captured by the evil Swedish king Nmdud who lamed him by cutting his hamstrings and forced him to work at his forge. In revenge, Wayland killed two of the king's sons and turned their skulls into drinking bowls, sending them to Nmdud as a gift. He also gave gifts of jewellery made from their teeth to their sister, Bodvild. When she came to Wayland with a ring to repair, he raped her, then revealed the nature of his 'gifts' to the family. He escaped by creating a magical boat of feathers to fly away in.

Wayland also had a famous sword called Balmung, and in a contest of skill with Amilias he cleft him down to the thighs with the sword. Balmung was so sharp that Amilias was not aware of the cut until he tried to move, then fell apart into two pieces. The sword was later placed in a tree by Odin, chief of the Norse gods, who stated that whoever could pull it out would own it and be victorious in all battles. All ten of the German princes of the time tried, and the youngest, Siegfried, succeeded. He featured prominently in Norse mythology along with Balmung which he used to kill Fafnir the dragon.